Although the price is much less, the D-series 4K TVs from Vizio for 2016/2017 look suspiciously similar to the M-series from 2015 in specifications, design, and functionality. It has the same processing engine, and very similar color and contrast performance. The M-series TVs had more zones of active dimming, but aside from that and some aesthetic differences, it is a very similar TV.

The LCD front panel can have a major impact on viewing quality and be quite different, or virtually identical, each year. Since we don’t have last year’s specifications for the panel, we have to guess by viewing. Most of the characteristics and measurements are the same as the M-series. The similarity may make the D-series more appealing to you since it’s a couple hundred dollars less expensive.

As with previous years we keep producing and buying 4K TVs but there is little content out there to enjoy it with. Plus, we increasingly stream our video. This makes upscaling all the more important. Upconversion takes on significant importance in our evaluation since most everything you will currently watch (1080p HD, 720p HD, 480p/i standard def). This places importance on the processing and upscaling engine.

The D-series Vizio uses the same processing engine as last year’s M-series and that’s a positive. The picture quality understandably varies based on the source. BluRay, Broadcast and streaming video are very defined and excellent, taking advantage of some of that 4K resolution.

One of the most notable features of the D-series 40” model is the 12 Zones of LED full array backlighting. This system beats edge lit backlighting in a couple of important ways, namely better contrast and black levels in certain situations and better side angle viewing quality. Toggling the Active LED Zones setting back and forth revealed the better contrast in areas of the picture where the feature increased contrast. While the zonal manipulation is a clear benefit, I believe the full array backlighting is the greatest qualitative difference maker here. Black levels appeared very saturated, and once calibrated colors looked great. This TVs got lots of pop for the price in the picture category.

Vivid – The TV comes preset out of the box set to the Vivid setting. The setting has a significant blue push as the Color Temperature is set to Cool. The Auto Brightness control is disabled, Backlight 90, Contrast is 50% and Sharpness 60. They are normally more on the Vivid setting.

Game Mode – Gamma 2.2 with Game Low Latency setting On. Clear Action setting On. Active LED Zones Off. This is a great gaming TV. The Reduce Judder and Reduce Motion Blur settings set half way 50%. This combination of the TV’s features improves response rate for gaming. The Game Low Latency setting that helps reduce input lag no matter what Picture Mode you are using. The TV has incredibly low input lag in the Game Mode and we do not hesitate to recommend this model as a gaming TV.

Computer – Cuts Sharpness to 0. Gamma 2.1. Reduce Judder and Motion Blur 50%. All other advanced settings Off.

Calibrated – Close to D65K out of the box. Nice warm, natural colors. Backlight 85, contrast, 50, color 50, Sharpness 30. Has an 11 point white balance adjustment and uses the Normal Color temperature. Flesh tones look warm and greens are tamped down to natural saturation. The Clear Action setting is set to Off.

Calibrated Dark – For dark room settings, dials in better black levels even better. Same exact settings as Calibrated Mode except with the Backlight dialed down to 26%.

There are only two Color Temp choices aside from Computer – Cool and Normal. Think of the Normal Color Temp as what would normally be called Warm 1. The Calibrated Mode does a good job of getting near D6500K without much dithering with the 11 point white balance.

This setting comes set to 50% in all preset picture modes. It over-clarifies the background of the picture introducing what we call the “Telenovela”effect – a fake unnaturally enhanced picture. I recommend turning this setting Off for all but sports programming and Game mode. You will see a bit of judder, but that is natural. If you want to try older DVDs with it, try those as well as it can bring new life to them.

A 120 Effective Refresh rate is Vizio’s backlight scanning feature that amps up the native resolution of the screen for better fast action performance. There are times when this is helpful like with sports, but it should normally be kept Off. Turning the Reduce Judder setting Off will enable some noticeable judder from the 60Hz native, 120Hz effective refresh rate screen. You get used to it quickly. 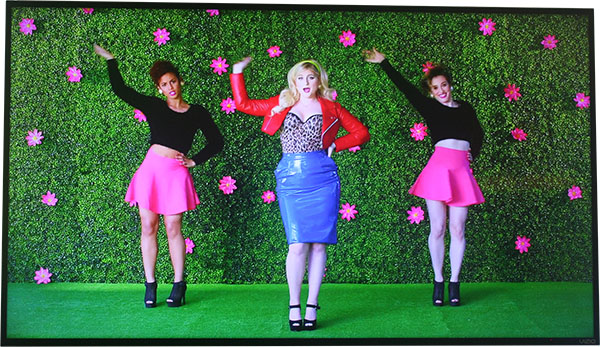 “From 15 degrees off center, you’re looking at around a 10% reduction in color saturation”

One of the greatest traits of local array LED backlit TVs is the beautiful lighting effects from on-screen windows and on-screen in room lights. It can add a neat visual effect and make programming more 3-dimensional, but be warned, it can cause the picture to look less realistic by basically diminishing natural background blur. The good news about this is that it did not often bleed over into shadows. Often LED backlit LCD develop some clouding and unevenness in dark scenes over time so this is something to watch out for. But from front and center you will enjoy the benefits of the strong LED backlighting. 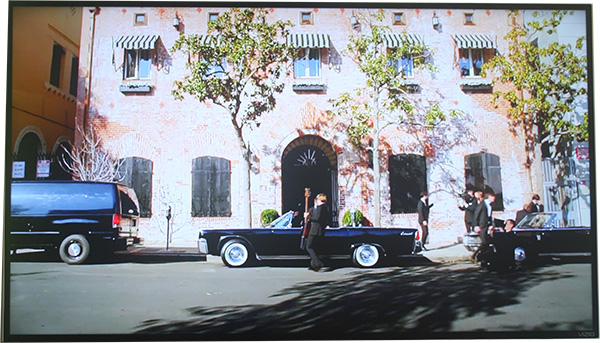 The performance in this area was better than most LED backlit TVs, which worth noting since the only other option is expensive OLED TVs. We mentioned before that there are 16 separate backlight zones in the D-series Vizio. As mentioned above we recommend leaving the local dimming setting on for enhanced contrast and black levels. Performance here was decent as this can be such a detractor with LED backlighting. This category of performance often changes over the time you actually use the TV. It can get worse. Noticeably at the time of testing, a bit more light came from the center of the screen, which makes sense since it has full array LED backlighting rather than edge lit. There were minimal backlight issues like darker edges.

802.11ac dual-band MIMO wireless is built right into the TV for the fastest connection available. See above for our comments on picture and sound quality from streaming. The Vizio D40u-D1 pushes the updated Smart TV platform, Vizio Internet Apps Plus, the same as the M-series from last year.

One of the best upgrades is the processing power. The V6 processor provides a quad-core GPU and a dual-core CPU. This combination did a fine job of handling all the video and computing that you’ll need on a smart TV. The picture quality is definitely softer when streaming movies. The Menu settings are discrete for Internet connections and comes preset to Calibrated Mode.

There is no Internet browser included with the Vizio Internet Apps Plus suite and no way to connect to the open Internet. As a result, that makes the implementation of the QWERTY keyboard questionable since there is no place to truly utilize it. You are limited to the Yahoo! Apps store. 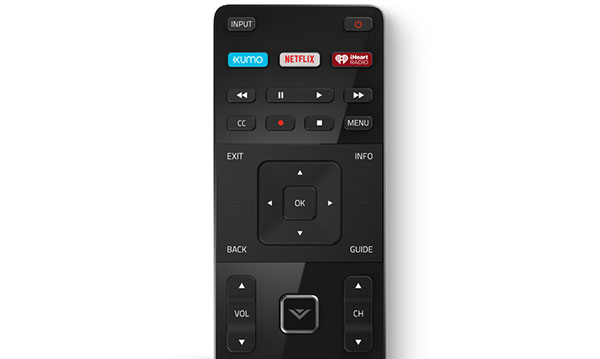 The buttons on the standard remote are too small in many cases and operation is not smooth. Additionally, smart TV buttons for Netflix, Xumo, and iHeart Radio can be found, allowing quick access to those Apps. The front side is not backlit.

There are 5 HDMI ports on the 65” D series. But check below in the value section for the others.

Stand Design – The sturdy metal stand feet are black and they sit wide on the TV as you can see from the above picture. Whichever size version you get, take into account the width of the stand feet if you plan to set it on a table. The stand feet are located approximately 3.5” from the outer edges of the TV, so make sure your table is wide enough to fit the display stably.

The balance and quality of the speakers was impressive. Volume from the 2 X 15W speakers was very loud even at only 40% volume level. When viewing the BluRay remake of Return of the Jedi the TV did a very acceptable job with voice clarity and quality. There is plenty of volume even for a very large room. The Surround Sound feature is set to On which provides fuller sound. This is one of the best speaker/audio sets in the market.

Some of the D-series models have subtle differences as noted below. The 70” model at only 1080p resolution is a not-so-minor difference.